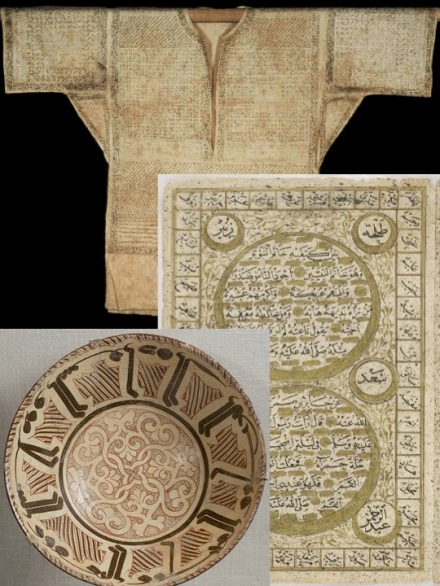 In Iranian culture and folklore it is believed that besides being elements of language and narration, letters and words possess hidden meanings and powers. In the 14th century A.D. a Sufi by the name of Fazlallah Abolfazl Astarabadi Ajami (1340–1394), who is known as Fazlallah Hurufi, and his followers who were called Hurufis, claimed that they had discovered “the secret of the words of divinity.”[i] They believed that “God is embodied in words and letters, and his words appear in the existence of human kind. Words of divinity are embodied within Man and he is therefore, the supreme manifestation of God himself.” Therefore, the human body as well as words and letters became symbols that carried scared meanings.

In Islamic tradition writing as a sacred practice also manifests itself in various forms such as Hilya which is a verbal portrait. According to Priscilla Soucek[ii] (2000), Muhammad b. Isa al-Tirmidi in Shama’il al-Mustafauiyah stated: “[A Hilya describes]the Prophet from head to foot and comments on the manner in which he moved, spoke, and behaved. The wealth of concrete detail in this text about his height, hair, eyes, complexion, torso, and limbs would permit a person to imagine the Prophet in his “mind’s eye” or by using what al-Ghazali calls “inner perception.”Hilyes became sacred objects, which were also considered to have protective powers and desirable items to carry in pockets or keep in homes.

Sacred writings were also used on pieces of protective garments worn by children or soldiers under their battlefield armors.These pieces of talismanic clothing covered with symbols and signs or verses of Quran were meant to protect the wearer from harm, evil eye and injuries. As Yasmine Al-Saleh states: “Talismans that contain inscriptions with the names of prophets and religious heroes have the power to protect an individual from hardship and danger by acting as a conduit between the two.”[iii]

Besides its supernatural powers, the visiual power of writing can be seen in exquisite late 10th and 11th century Iranian ceramic wares from Nishapur. Although the writings on the Nishapur plates and bowls related to their function as vessels for serving food yet the words also provided nourishment for the soul and spirit. Examples of such writings are “Eat with appetite” or “The thankful eater is comparable to the one who fasts patiently” and “Blessing, prosperity, goodwill, peace, and happiness.”[iv]

Images from the top:

[ii] Soucek, P. (2000) The theory and practice of portraiture in the Persian tradition.

[iii] Al-Saleh, Y. (2010) Amulets and Talismans from the Islamic World. The Metropolitan Museum of Art.