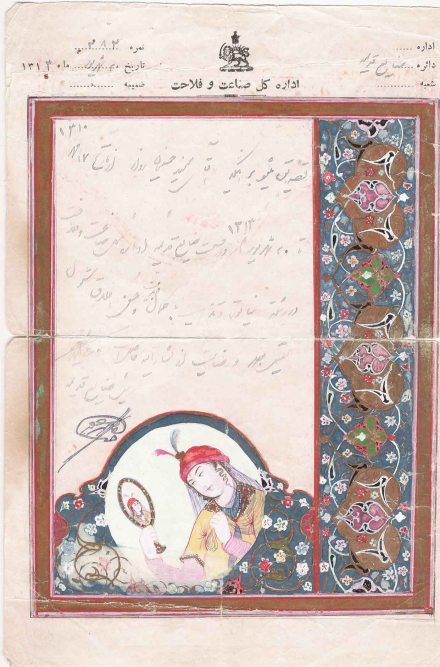 This is to certify that Mr. Sayyed Hosien Zavar has been studying, from October 9th of 1931 to September 11th of 1934, Miniature Painting and Illumination at the Old Industries section of the Main Office of Industry and Agriculture with outmost seriousness and best behavior, and he has our approval.–Director of Old Industries

In a personal context, this document is a private artifact and a piece of my family history, which connects me to Sayyed Hosien Zavar not only as my grandfather but also as an artist. It always amazes me how little we know about the people who were/are so close to us until we start asking questions and making connections between fragmented memories and information in our lives.

My grandfather was born in 1904 in Mashhad, Iran and later moved to Tehran with his bother. He was always interested in art and painted all his life. In Tehran he studied Miniature Painting and Illumination at the School of Old Industries from 1931 to 1934, he married my grandmother when he was 33 in 1937 and they had five children. To support his family he joined the army and after retirement he dedicated his time to painting full time. He passed way when he was 63 in 1967 in Tehran. My family has kept some of his finished and unfinished works and numerous studies and sketches as well as his art materials and tools, which are valuable sources of information and inquiry about my grandfather as an artist.

In a historical context, this document is a public document, which is related to an important era of art and art education in Iran. According to Eftekhari[i] (2002), under the order of the government at the time, the School of Old Industries was established in 1930 by Haousien Taherzadeh Behzad. The mission of the school was to revive and restore the traditional arts such as miniature painting, textiles, woodworking, tile making and ceramics. I am curious to know more about the program of study and curriculum of the school? Who were the teachers and students? Who were their students later? What was the influence of the School of Old Industries on art and art education in Iran?

I also consider this document to have two authors. One is the Director of the School of Old Industries who wrote the letter and the other one is my grandfather who painted around the letter. The intension of the writer of the text was to certify that my grandfather, Sayyed Hosien Zavar, indeed studied at the School of Old Industries for three years and learned the required skills and knowledge for Miniature Painting and Illumination and he was also a serious and courteous artist. This letter was a verbal and official testimony to that fact.

Yet my grandfather also authored this letter by adding another layer of meaning to it through presentation of his skills and proving that what was written in the text was visually evident. He was clearly saying “Don’t take the words for it, see it for yourself.” On the right side of the letter where he has illuminated the wide margin, he is demonstrating his skill as an illuminator and on the lower part of the letter his skills as a miniature painter. The painting is depicting a woman holding a mirror and looking at her reflection. It not only shows intricate details of the woman’s face, clothing and accessories but also reveals the details on the even smaller reflection of her in the mirror and in reverse. Therefore this is also a “reflection” of the painter’s mastery. The relationship between my grandfather and the document is similar to a portfolio for an artist. This leads me to assume that the targeted audiences/readers could have been future employers or clients of my grandfather. Conceptually, he may have been also presenting the philosophical idea of artist as the tool for “reflection” of  beauty or the notion of art as an agent for “reflection.”